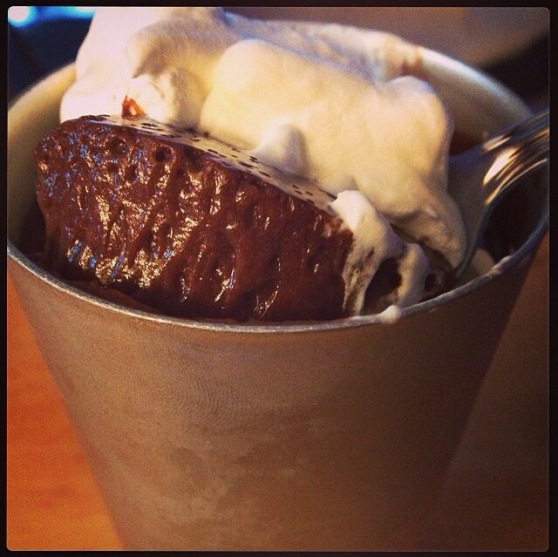 The following “Chew This!” column has been reprinted from “The Courier-Times”, Sunday, March 20th 2016 edition. By: Blaise Doubman

Scratch made pudding is perfect for pies, or spoons…
Blaise Doubman

I have been on a mission lately to see how many things around the house that I could make, from scratch, instead of buying a pre-made packaged box mix, and then comparing the differences to see if the extra time and effort was worth it. It’s been a fun, interesting and tasty journey and my results produced one of the recipes that I’m sharing with you here today. The first item I tested in “boxed versus scratch made” was cake. Growing up, my Grandma Barbra taught me how to take a boxed cake mix, add a few ingredients not listed on the box, and transform it into really something special. Did you know you should always add milk, instead of water to a boxed cake mix? Or that sometimes instead of vegetable oil, you can add melted butter? You would be surprised how different the final taste and texture of the cake is, after adding the “secret ingredients”. In my experiments, there is a taste difference between cake mixes and scratch made cakes, of course, but there’s nothing wrong with using a cake mix when pressed for time. Just remember to try and add extra flavor to the cake mix for a “scratch made” flavor.

Brownies were my next experiment and honestly I wouldn’t turn down any brownie, so this one was a little trickier. Scratch made brownies, for the most part, are deeper and richer than the boxed variety. But in turn, boxed brownies have been a staple for me since my childhood. After many taste tests, I have to say that I like a scratch made brownie, although to make a boxed brownie mix taste pretty close to something scratch made, add milk instead of water, add chocolate chips and stir in some instant coffee granules. My favorite testing though was for chocolate pudding. I tested pudding cups, instant pudding mix, cooked pudding mix, and pudding from scratch. The chocolate pudding from scratch was by far superior to anything that you can buy in stores. The taste is so much better, it’s a pretty basic recipe and the ingredients you should already have on hand! It makes a delicious dessert served as is, or as a pie filling topped with whipped cream or meringue.

This rich chocolate pudding is so much better tasting, and better for you, than the chocolate pudding mix that you can buy in the grocery store. To add even a little extra chocolate flavor to this pudding, stir in about a teaspoon of instant coffee granules, chocolate chips, or chopped dark chocolate. I prefer serving this pudding in individual serving containers and topping with whipped cream.

Start by stirring together the white granulated sugar, unsweetened cocoa powder, cornstarch and salt in a large saucepan over medium heat with a wooden spoon.

Add the whole milk, and stir constantly until a full boil is reached. This will take several minutes, but you will know when it’s ready because the mixture will appear thick, and will easily coat the back of your spoon.

After thickened, remove from the heat and stir in the unsalted butter and pure vanilla extract. Once combined, let cool slightly before serving or refrigerating.

If refrigerating, apply plastic wrap to the top of your serving container to prevent a skin from forming on top. If using for pie filling, pour into pie shell and decorate accordingly.